For a moment there was nothing, and then he started to show me things...
This article contains spoilers concerning inFamous. Read at your own risk.
Template:Revamp 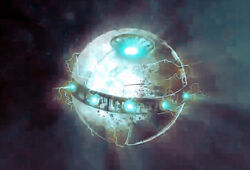 The Ray Sphere left Empire City in a Quarantine and soon crimes started to break out after the city became desperate. Several factions seized control of the districts and terrorized the city. Cole and Zeke Dunbar later stole the Ray Sphere off Alden Tate and the Dust Men. Zeke, who believed the Ray Sphere would give him powers attempted to activate it. However, nothing happened. Kessler who was present claimed he could fix it, hence Zeke joined Kessler with the Ray Sphere and betrayed Cole.[1]

John claimed that he held it before and it felt as if something was inside, pulsing, and it was unnatural. Cole used a lightning storm to destroy the casing and Ray Sphere. However, the Ray Sphere cracked open and revealed a vortex of energy. Pulling John into it, he was torn apart. The Ray Sphere then exploded and destroyed the whole habour as Cole fled. The Ray Sphere was reduced to ashes and the threat of it ended.[1]

Retrieved from "https://infamous.fandom.com/wiki/Ray_Sphere?oldid=36508"
Community content is available under CC-BY-SA unless otherwise noted.