Reaper Conduit fatigues consist of long black and white trench coat adorn with a hood with the Reapers signature skull logo; as well as ripped jeans and white wrappings running along their legs.

Sentry: Conduit reapers are often sent out to guard vital assets to reaper street gang; be it tar valves, tar kegs, or the reapers headquarters located in the Jefferson Tunnel.

Assault: Conduit reapers are often sent out to conduct assault operations against hostiles through ambushes, rampages, or coordinated front line offensive's along with other reaper units.

Escort: Conduit reapers are often sent on escort missions alongside their other reaper brethren; be it a civilian abduction, or tar truck escort.

Reconnaissance: Conduit reapers are often sent out on recon missions; be it in the form of a standard patrol or undercover surveillance.

Enhanced Physical Strength: Once activated the conduit gene begins to restructure and strengthen the carriers muscle fibers giving them greater physical strength compared to to the average human; with their strength being comparable or superior to the strongest of human athletes. Thanks to this, conduits have been known to be easily over power normal humans; conduits have been seen being able to send a normal human flying back with one well placed punch or kick as if they were made of plastic. Strengthened leg muscles have apart from allowing the conduit to kick harder also has been shown to allow them to move faster with moderately fit conduits being capable of running up to 19 mph for an extended period of time and being able to lift up to 800 pounds.

Enhanced Physical Durability: Once activated the conduit gene begins to restructure and strengthen the carriers skeletal structure including joints, ligaments, and epidermis aside from the muscular system of the host. Thanks to this conduits are able to withstand severe injuries and high amounts of physical trauma that would have otherwise killed a regular human being; conduits have been noted as having survived falls or jumped from a 14 story building without serious injury or having withstood a head on collision with a trailer, train, or close proximity explosions and still being able to carry on without much hindrance.

Enhanced Stamina: Once activated the conduit gene begins to slow down the build up of lactic acid within the host muscular structure as well as slowing down the production of other fatigue toxins in the host body. Thanks to this, conduits are able to physical exert themselves far harder and longer than would be possible for even Olympic level athletes.

Regenerative Healing Factor: Once activated the conduit gene enables the regeneration and restoration of damaged tissue at the molecular level. It is this advanced regenerative healing factor that enables conduits to keep on fighting despite sustaining significant damage. This could also explain the slowing of fatigue toxins in the conduits body and could also by extension grant prime conduits a longer life span exceeding centuries. It is also important to note that it is because of this healing factor that conduits require larger doses of narcotics in order for them to take effect. Conduits have been known to completely heal from injuries within 10 to 15 seconds depending on the severity of the injury sustained. Elemental conduits have the added benefit of being able to heal in less than that when exposed to their element.

Power Description: The power to manipulate the molecular structures within oneself or another object.

Conduit Reapers excel at urban combat, frequently making use of and darting between cover to avoid hit by opposing enemy projectiles; their slimmer shape-shifted bodies (Combat Assault Form) making them quite nimble and providing them with a smaller target profile. While generally their marksman skills are lacking, reaper conduits circumvent that through the strategic implementation of their conduit abilities; either by using their teleportation to quickly close in on a target before unloading their weapons clip or using it as a quick evasion tool to build some distance between them and their adversary should they get to close. Another strategy these conduits tend to employ is to quickly reload their weapon while they are on the move thus allowing them to resume firing once reaching an advantages position or reload while preparing to fire a shockwave thus enabling them to continuously press the offensive; though generally not commonly used when fighting solo, conduit reapers can and will occasionally employ flanking maneuvers to surprise enemies. Aside from the creative implementation of their conduit abilities mentioned earlier, conduit reapers also employ their abilities in a more practical manner, using teleportation in the midst of combat to circumvent an opponents line of sight and deal surprise attacks from unexpected angles or use their shockwave ability to deal massive damage or strike an enemy around corners. Though rarely used conduit reapers do employ the usage of their shape-shifting abilities in an offensive manner (aside from their Combat Assault Form); using their disguised persona to draw unsuspecting targets into potential ambushes. 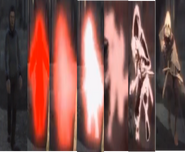 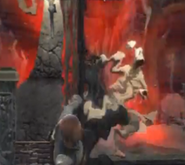 Reaper Conduit in the midst of teleporting 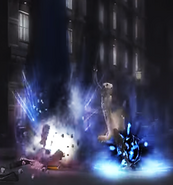