“The Militia set up some camps around here. We gonna have some fun!”
— Nix telling Cole what they're going to do.

Revenge is an Evil Side Mission in Infamous 2.

As the mission begins, Nix appears. She tells him that a Militia is somewhere nearby, and that they're "[going to] have some fun" with them.

Following Nix by staying on the roofs and defeating the Militia until eventually Cole ends up at the camp, and teams up with Nix to fight the remaining soldiers. After defeating them, the mission ends, and Nix leaves. 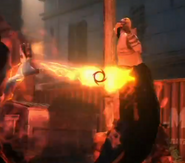 Working together with Nix.
Add a photo to this gallery
Side missions in Infamous 2
Retrieved from "https://infamous.fandom.com/wiki/Revenge?oldid=110084"
Community content is available under CC-BY-SA unless otherwise noted.