Infamous
Infamous (comics)
Sasha is the former lover of Kessler and the secondary antagonist in Infamous. She was the leader of the Reapers faction in Empire City and was one of the few people whose Conduit powers had developed before the blast. Like Kessler, she was working with the First Sons, and was a specialist researching mind-control techniques. For a time, John White was assigned to work with Sasha when he was undercover within the organization. Post-Blast, she was the leader of the Reapers who dominated the Neon District.[1]

I'm now tasked with protecting a woman named Sasha. She's supposedly researching mind-control techniques. Something with a spray or a gel. My guts tell me she's a honey pot, so I'll have to be careful around her.
― John White on Sasha working for the First Sons.[1]

Sasha was originally a mentalist and scientist working for Kessler and the First Sons. During her time with the First Sons, Sasha began to research mind-control techniques and developed a spray or gel-like substance, an early prototype of the Black Tar. John White also suspected she was a "honey pot", which is an agent who seduces other agents to extract info from them. Sasha eventually started a somewhat romantic relationship with Kessler himself, however, it appeared largely legitimate. At times, however, Sasha expressed her frustration, often commenting that Kessler "isn't doing as he is told", or why he is so "different".[1]

Despite her relationship with Kessler, Sasha had John White escort her out of the Historic District to the the Warren to meet an elderly man, most likely Alden Tate, and ordered John not to tell anyone of this. After some time, Sasha was expelled from the First Sons after having a public argument with Kessler. After Sasha physically attacked Kessler, John White was tasked with escorting Sasha out of the premises. Before leaving, Sasha turned back, looked at John, and said that they are all going to die by her hands. After that, she left the First Sons and descended into drugs.[1]

After the Empire City Blast, Sasha, who had the Conduit gene, had her Conduit abilities increased and was one of the many to begin their rise to power from there on. She seized control of the Neon District by forming the Reapers, a faction that originally appeared to consist of drugs dealers and scum, however, the faction soon become a powerful gang and took whatever they needed through means of force.[1]

Eventually, the mind-control agent Sasha worked on with the First Sons was soon weaponized into tar. Sasha had civilians abducted and sprayed them with her tar; they were soon under her control and ready to follow her orders. With the black tar considered as a plague-like affliction, the Reapers that were exposed to it had a mental link with Sasha. Through this, Sasha gave her orders.[1]

Sasha was the source of the tar, and was able to produce it organically, extracting it from her own body using attached tubes. She was able to spread the tar much like a plague, by contaminating the town's rooftop water

supplies. The only person who seemed able to resist the black tar's effects was conduit Cole MacGrath - who instead of being subject to its mind-controlling effects, would become dazed, phasing out, suffering intermittent hallucinations and being unable to walk properly. Sasha, confusing Cole with Kessler, started communicating with Cole during these bouts. She constantly taunted Cole with twisted insults.[1]

Despite this, Sasha also started claiming she loved Cole, especially showing great hatred and rage at Trish Dailey. However, Sasha continued to lead the Reapers and abduct many civilians.[1]

You don't know, do you? Of course not, how could you?! But you'll find out soon enough. And oh how you'll weep!
― Sasha taunts Cole.[1]

Moya Jones discovered that Sasha was operating out of the Jefferson Tunnel, and ordered Cole to confront her. Soon her prisoners that she was going to spray with tar were freed. When Cole arrived, Sasha pretended to be happy about his presence. As the tubes connecting Sasha to the tar pumps were removed from her body, she walked towards Cole, claiming they were late for a party. Through this insane rambling, Sasha begin to fight Cole immediately, teleporting out of sight.[1]

Though she was an evasive and unsettling opponent, eventually Cole gained the upper hand, ripping off the tar pumps placed on her shoulders, which severely weakened her.[1]

Losing much of the tar from her body and overcome by the damage and strain of the fight, Sasha fell to the floor, defeated. She demanded Cole to look at her and see what his powers had done. She claimed he did not control them, they controlled him. As Sasha smirked at Cole's indecision, he began to interrogate Sasha for information on Kessler. However, the First Sons immediately entered the compound. Burying Cole under rubble, the team extracted Sasha and took her away for torture.[1]

Prisoner to the First Sons

Please stop! I'll do anything you want!
― Sasha, pleading to Kessler during one of his phone calls to Cole.[1]

When captured by the First Sons, Sasha was put through many forms of torture by them, and soon they took the tar substance from Sasha's body, and used it to produce a toxic mind-controlling gas to scatter over Empire City via air balloons.[1]

I know how much you love me, Cole. I can feel it.
― Sasha after freeing (and then kissing) Cole.[2]

Later, after Kessler's death, Sasha escaped from the First Sons' facility, but was quickly recaptured by DARPA and Moya Jones. Like Kessler before, Moya weaponized the black tar Sasha produced and used it as an airborne poison to assist in Cole's capture. Confusing Cole and inducing a hallucination of an angry Trish Dailey, Moya was successful in capturing Cole, holding him on an aircraft carrier, but only retained him briefly due to Sasha's intervention.[2]

Shortly after Moya captured Cole, Sasha broke out of confinement, and made her way to free Cole, declaring her love for him as she kissed him.

She then provided cover for Cole, who escaped Moya's aircraft carrier. While Cole escaped, Sasha engaged in a one-on-one fight with Moya. However, Sasha was unable to overcome Moya when back-up soldiers arrived, successfully escaping into Steel Harbor after breaking through the aircraft carrier's hull.[2]

Though Sasha remained hidden after escaping Moya, and her fate is unknown, she may have died when Cole activated the Ray Field Inhibitor, killing most of the living conduits.[3] Although, in InFamous: Second Son, it is revealed that not all the conduits had been killed after the activation of the RFI, so there's still a chance that Sasha may still be alive.

Make him pay for what he's done to me! Kill him!
― Sasha to Cole as he fights Kessler.[1]

In an alternate timeline, where Cole chooses to follow the path of evil, Sasha continued to contact Cole telepathically after her capture by the First Sons. Sasha, through working with Cole, had him aid the remaining Reapers in a series of events, which eventually lead to them overthrowing the Empire City Police Department. Finally, during Cole's final battle with Kessler, Sasha talked to Cole one last time telepathically, telling him to make Kessler suffer for the torture he inflicted upon her.[1]

Sasha is bald, with gray skin and sharp claw-like hands. She wears only a long-sleeve jacket with a red hood up, and also bears some sort of device on her shoulders and upper body that is constantly pumping black tar. The lower half of her body appears to be naked, aside from being covered in a red-colored version of the tar. Also, her tongue is able to split into several tendrils.[1]

...You don't know love - not true love. But I will teach you...And then, the bastard will realize what he's lost!
― Sasha speaking to Cole telepathically.[1]

Sasha's personality presents itself as being mentally unbalanced, and she could possibly be deranged. Her dialogue with Cole reveals she appears to suffer from obsessive love and dissociation. While she speaks to Cole directly (in the first-person tense) as if they were at one point in love, and a couple, at the same time, she will occasionally refer to Kessler, by using the third-person tense, sometimes in the same sentence, and sometimes by name. She also knows about Trish's significance to both Cole and Kessler, and expresses her extreme jealousy of her by threatening to kill her.[1]

When Cole confronts her in the Jefferson Tunnel, Sasha seems to have become almost totally unhinged - she preludes the fight with seemingly non-sensible and random statements about being late for dinner, traffic on the road, Cole's tuxedo, soup made from the neighbor's bones and Cole and her sleeping together in Maine (though that last remark could possibly be in reference to an actual event, that involved Kessler).[1]

While never explicitly stated, its heavily implied she knows about the fact that Kessler and Cole are the same person from different timelines, which would make her confused and desperate, as well as insane. She also constantly refers to the Reapers as her "beloveds", as well as referring to spreading her mind-controlling black tar on the city's populace as "showering them with my love". Though she appears to be mentally unstable, she does possess enough sanity and intelligence to pose a significant threat to both Cole and Moya - she's percipient enough to devise the different methods to introduce the tar into the Neon's water system.[1]

After the Blast, Sasha became a conduit, and was able to produce and manipulate a very dangerous substance known only as the Black Tar. It is unknown exactly how her body produces it and how exactly it connects with her powers. Most individuals get sick or fall under Sasha's control once subjected to the substance; few are able to resist the toxicity. Sasha is also able to perform specific acts and powers.[1]

Sasha on her throne.

A close-up of Sasha.

Sasha when Cole pulls off a cap.

Sasha, before being interrogated by Cole.

Concept art of Sasha, sitting on her throne pump. 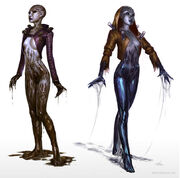 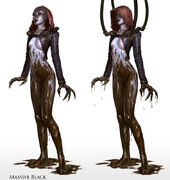