Light In The Tunnel

Secrets Revealed is the 27th story mission in Infamous.

After John White instructed Cole to meet him alone in the Warren District, Cole heads out to the docks. Once there, Cole shouts for John to come out, only to be interrupted by a helicopter which causes John to flee. Cole contacts Moya, asking her why she brought a chopper, which she denies, telling him she didn't and that if it's the First Sons, Cole should get to John before them.

Cole begins chasing the chopper. Moya contacts him to inform him that John messed with the radio frequency because all she hears is static, and trusts Cole to keep her informed. After following the chopper from roof to roof, Cole finally reaches John, only to find that the chopper reached him first. Before the chopper can take John, a Golem appears and destroys it. It then lifts a gas tank to launch at Cole, with several injured civilians at its feet and a short karmic cutscene ensues. Cole is faced with a choice:

Cole can allow the gas tank to be thrown at him causing high damage and slowing his movement, but sparing the civilians from the explosion. This won't greatly disadvantage Cole, as he can drain electricity to remove the damage.

Cole can shoot the gas tank, which will remove the Golem's arm for the remainder of the battle, giving Cole an advantage, but killing the civilians.

After defeating the Golem, Cole shouts out to John that it is safe to come out. After receiving no response, he runs to the bus John was hiding behind to find that he is missing.

John is hiding from the Golem.

The Golem lifts up a gas tank.
Add a photo to this gallery 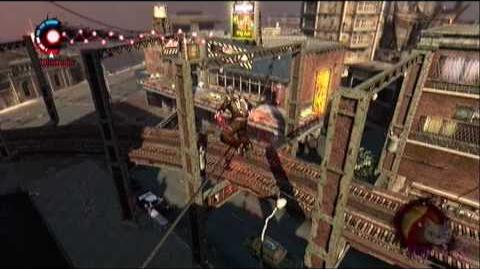 Story missions in Infamous
Retrieved from "https://infamous.fandom.com/wiki/Secrets_Revealed?oldid=105717"
Community content is available under CC-BY-SA unless otherwise noted.