Smoke refers to the ability of absorbing, controlling and redirecting smoke, fire, and embers. It is first demonstrated by an escaped Conduit named Hank and later absorbed by Delsin Rowe. It is the first power absorbed by Delsin and is designed for those who want a more fast-paced fighting style.

This power is primarily used to get up close and personal with Delsin's enemies with quick and violent attacks. The Smoke Shot has an appearance of a fireball; it can be fired off very quickly, but it has a low damage output. The travel speed on the projectile makes it suitable for close and mid range combat, but not long range. The shot can also be charged and shot either in a form similar to a blast, called a Cinder Blast. The shots, regular and charged, are used by pulling R2 on the DualShock4. Tapping activates a normal Smoke Shot, and a Cinder Blast can be achieved by holding down the trigger.

Also, there is a grenade-like weapon called a Sulfur Bomb that, when used, by tapping L1, knocks back all nearby enemies, and chokes them, allowing Delsin to subdue or execute them to earn good or bad karma respectively. As well, there is an attack akin to the previous rocket, called a Cinder Missile, which is activated by holding R1, which requires a Heavy Ammo icon (white "rockets" found on top of the power bar in the HUD) to function.

After absorbing Smoke, Delsin can use a variety of abilities, such as the Smoke Dash, that turns Delsin into a wispy cloud of smoke and embers, which can be used to achieve a semi-flying status, similar to Cole's Firebird Strike. He can also use this dash to close the distance between himself and enemies, and can even use it go through them, choke-slamming them (onto either the ground or his knee) then re-materializing. Since he can turn into smoke, Delsin can use the smoke dash to go through structures with openings, like chain-link fences, iron bars and pipe-like structures. He can use ventilation systems to his advantage to appear almost instantly on the roof of a building, by using the dash while facing a vent at the base of a building, on by Smoke Dashing towards a vent on a roof, Delsin can boost his normal jump height.

Delsin also has an ability called Smoke Thrusters which functionally the same as Static Thrusters. When using this power he expels smoke from his arms, boosting his upwards momentum and slowing his descent, allowing him to glide.

The melee attack for this power-set superheats Delsin's chain, allowing him to use it as a powerful whip that explodes in a small puff of embers and ash upon contact with enemies.

A unique trait for Smoke is that by destroying vehicles you gain a source of energy from the burning wreckage. Tear gas grenades from the DUP can also be absorbed by Delsin to fuel the Smoke powers. This marks the first time in an InFamous game that the protagonist can turn the weapons of enemies into an energy source.

The Karma Bomb for Smoke is the Orbital Drop, which allows Delsin to dispatch a large number of enemies at once. When used, (regardless of his morality) Delsin charges up momentarily, before condescending into pure smoke and shooting upwards into the sky, reforming into a humanoid shape, and then rocketing back down, while using the smoke thrusters to aid his descent, before exploding on impact and reforming. Delsin cannot use this power indoors, like in a building or underpass, for example, because of the fact that Delsin cannot reach a large enough height for the Orbital Drop to be effective, and falls back down after colliding with the ceiling.

Good Karma - If Delsins Karma Level is on the good side of the spectrum, his smoke powers will appear more bright orange in color. His attacks will have various orange streaks of light, similar in appearance to the orange embers the smoke of fire emits. The smoke itself will also be more streamlined and less thick, appearing like the smoke of a normal wood fire.

Evil Karma- If Delsins Karma Level is on the Evil side of the spectrum, his smoke powers will appear darker and puffier. The streaks of light his attacks carry are more erratic, and don't show up as often. These streaks will also be dark orange, almost dark red in appearance. The smoke itself will be darker, thicker and will overal spread out more. This version of his smoke appears like the heavy smoke that comes from rubber fires. 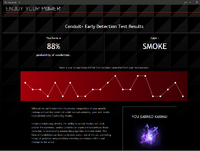