"Standard Protocol" is the 21st story mission in Infamous.

“The Dust Men think if they load hostages on their boats, the military will back down and let them pass through the quarantine”
— Moya explains the Dust Men‘s plans

Cole receives a call from Moya informing him that the Dust Men are planning to load boats full of civilians in order to cross the quarantine. Moya says that the Military is under "strict" orders to maintain the quarantine and have standing "shoot on sight" orders. She then tells him that he will have to find all of the boats and disable their engines. Cole states that he does not want the hostages' blood on his hands, but he doesn't see how it has anything to do with him. Moya curtly replies that if she can't control the situation, she'll be replaced, and without her, he'll have no deal and virtually no way out of the quarantined city. Asking if he understands, Moya waits for his response before snapping "Don't ever take that tone with me again."

Heading to the first boat, Cole deals with the Dust Men guarding the pier before boarding the boat and breaking open the cages, freeing the civilians, and then destroying the engine. Heading toward the second boat, Cole receives another call from Moya, explaining that the Military are planning on attacking the Dust Men's boats, despite the fact that they are still docked. She adds that she's holding them off, but they won't wait forever. Cole mockingly replies, saying that maybe he should "go make a deal with them." Clearing the second pier of all enemies, Cole frees the group of prisoners and destroys the engine.

Crossing the island to the third boat, Cole calls Trish and asks how the hospital was looking. Trish responds positively, confirming that though it looked trashed from the outside, inside it was still in good shape. She adds that she thinks they should sit down and talk about what happens "once all of this is over," to which Cole replies "Sure, whatever you want." Cole then happily ends the call.

Arriving at the third pier, Cole faces a larger number of Dust Men troops, including a Dust Man conduit. After the boat is disabled, Cole receives another call from Moya, ordering him to get to the final boat. Angrily, Cole snaps "What if I don't? They going to start dropping bombs?" However, Moya simply replies that the President signed the order the week before, and if the Plague reaches critical level, he'll make the call. Shocked, Cole asks if they'll really bomb the city, and Moya explains that it's "Standard Protocol." Reaching the final pier opposite the Container Area, Cole faces another large group of Dust Men, intent on protecting their boat and its captive "load." With the Dust Men troops defeated, Cole frees the final group of hostages before destroying the engine, ensuring the Dust Men cannot try and break the quarantine.

Cole drains a boat engine to disable the boat itself.
Add a photo to this gallery 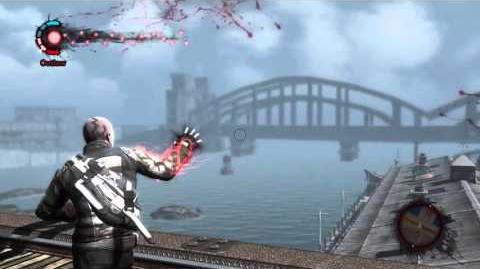 Story missions in Infamous
Retrieved from "https://infamous.fandom.com/wiki/Standard_Protocol?oldid=105634"
Community content is available under CC-BY-SA unless otherwise noted.