Back to page
View source

Use this page to discuss design and content changes to the main page. For general wiki discussion, please visit the Community Portal or Forums.

Since our current bureaucrat hasn't been on since April and has seven edits, I've taken the liberty to request to adopt this wiki. I'll be happy to contribute as I have wiki experience and know the game very well. SuSpence95 05:32, 1 August 2009 (UTC)

New page design = no worky out 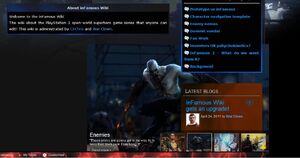 CORREZIONE: Seems to only be a problem with Internet Explorer. Mozilla Firefox, and likely Apple Safari, seem to be working fine. -- Master Sima Yi 09:05, April 24, 2011 (UTC)

Can someone update the Featured Article and Videos templates such that they're recent (i.e. talking about Second Son instead of inFamous 2)? Thanks.  Shrev64  Talk  Contribs  Master Thief  02:19,5/13/2013

Is this any different from the Wikipedia?

So, I left the regular Wikipedia after being there for about a year due to being put on a six month block, and don't plan to return because of it. Is there anything I should know, anything different? -- JosephP (talk) 05:41, July 8, 2015 (UTC)