The Arrest is the 23rd main story mission in Infamous.

Moya: "The remnants of the 43rd precinct have mounted an offensive against the Dust Men. My sources says they’re going to try and arrest Alden."
Cole: "Good that psycho should be behind bars"
―Moya calls Cole.

Moya Jones contacts Cole to let him know that the remaining police in the area were moving in to arrest Alden Tate, but first had to deal with his Dust Men. Telling Cole that Alden was his top priority, Moya promises to send in an extraction team once he is in custody.

Cole quickly makes his way across the rooftops and through the streets of the Warren District toward Alden's Tower, only stopping when he finds the body of a police officer. Using Psychic Vision, Cole is able to watch the officer's final moments, which was his attempt to arrest Alden, and how the Conduit had murdered the officer by throwing a car at him. After viewing the memories, Cole is able to see Alden's electrical echo and calls Moya to inform her that he has a lead. She warns him that this could be their only shot, and not to let Alden escape.

Following Alden's echo through the back alleys, Cole is faced with a Karmic choice. A group of citizens have hung a man from a lamppost, and are pelting him with stones and accusing him of stealing their food. Cole can blast the rope, allowing the man to run free, or leave him to the crowds punishment. Regardless of his choice, Cole swiftly catches up with Alden's echo as it moves through the Dust Men's Tent City. Dealing with any Dust Men he runs into, as well as avoiding the flooded areas, Cole makes his way through the turret-ladened labyrinth that formed the Dust Men's base.

“Ignore that Golem! Focus all your fire on Tate.”
— Warden Harms rallies his men

As Warden Harms issues instructions from a police helicopter circling the area, Cole finally makes his way through Tent City to the courtyard behind it. Here he is faced by a lone Dust Man stood amongst a pile of scrap metal. Before Cole has a chance to cross toward him, the Dust Man manipulates the scrap into an armor, turning himself into a Scrap Golem. As Warden Harms tells his men to focus on Alden, Cole struggles to penetrate the Golem's defenses whilst avoiding it's lethal attacks, until finding it's weak spot. With the Golem ultimately defeated, Cole sees the police helicopter fly over once more, and hears Warden Harms announcing that Alden is in custody and en route to the Eagle Point Penitentiary.

Taking on the Golem
Add a photo to this gallery 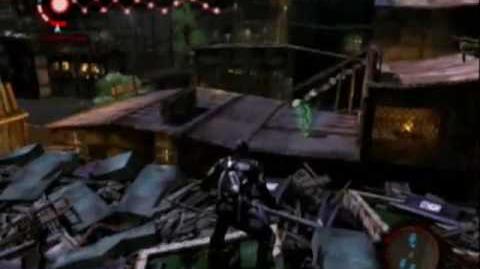 Story missions in Infamous
Retrieved from "https://infamous.fandom.com/wiki/The_Arrest?oldid=105679"
Community content is available under CC-BY-SA unless otherwise noted.