The Beast Draws Near

The Beast Draws Near is the 26th Story mission of Infamous 2.

After Cole turned the town against Bertrand, Zeke informs him that he found something he needs to see for himself to believe. Once they meet, Zeke reveals that he found out the Militia owned a nuke and stole it, and that he plans to use it on the Beast. Cole agrees, and gets on the semi. The Militia then attempt to take back the nuke, going reckless as to nearly shooting the nuke itself. After reaching the bridge, the Militia then start firing at Cole from their boats, but once again fail with the appearance of a Ravager, and later, the Ice Gang, though Cole and Zeke ignore them and focus on getting the semi in position as soon as possible.

“Better deal with these idiots first. We only get one shot at this.”
— Zeke

Once they reach the docks in Flood Town, Cole gets up to the targeting system and prepares to fire the missile. However, he is interrupted by the Ice Gang, to which Zeke advises Cole to make sure they're all dead before attempting to fire at the Beast. After a long battle between Cole and the Ice Gang, Cole finally clears them off and heads back to the targeting system, and successfully hits the Beast with the missile.

After the missile hits the Beast, Cole and Zeke are briefly knocked out by the force of the explosion. When Cole comes to, the sky is filled with dust and debris from the explosion, but as far as he can tell the plan worked. Cole calls out to Zeke and finds that he is pinned beneath some debris, but (despite hurting his leg) is otherwise unharmed. As Cole helps Zeke limp back to the truck, they both see a small vortex form between two of the cranes and realize that the Beast had survived the nuke after all.

“If I slow you down, we both die. Just go on, man. Live to fight another day.”
— Zeke to Cole, about running out of time.

Zeke begs Cole to go on without him but Cole refuses to leave his friend behind and quickly finishes helping him back to the truck. Cole and Zeke ride away but the vortex explodes, sending the truck flying away. Cole later wakes up near the overturned truck and realizes that the Beast is still alive and is now in New Marais.

Zeke calls Cole shortly after the mission and informs him that he attempted to follow the Beast but lost it as it entered the Gas Works. 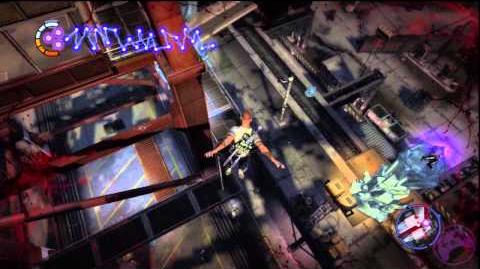 Story missions in Infamous 2
Retrieved from "https://infamous.fandom.com/wiki/The_Beast_Draws_Near?oldid=110646"
Community content is available under CC-BY-SA unless otherwise noted.