The Face of Change

The Face of Change is the 33rd story mission in Infamous 2.

Cole receives a call from Zeke who informs him that Joseph Bertrand has sped up his plans and is preparing to launch several cargo ships loaded with shipments of Forced Conduits. He tells Cole that he should get in there and stop them and that he can sabotage the ships by overloading the mechanisms controlling the anchors.

Cole makes his way to the first ship but quickly finds himself fighting a squadron of Vermaak 88 soldiers, as he fights Cole calls Zeke, and explains that the "ice guys" have the boat locked down. As Zeke begins to wonder if they knew what they had planned, Cole cuts him short, reminding him that he is in the middle of a fight. With the ice soldiers cleared from the ship, Cole drain the electricity, disabling the anchors. With the first ship slowly sinking into the harbor, Cole makes his way to a second ship, already loaded and prepared to depart. After fighting through even more Ice soldiers and Ice heavies, Cole makes his way to the ship bow to disable the anchors, only to have his way blocked by a Ice titan. After a difficult battle, the titan is defeated and Cole can disable the last ship.

As the last ship begins to sink, there is a flash of red light and Cole is nearly thrown to his knees. Looking up he is shocked to see John White standing before him, seemingly back from the dead. John explains how after the Ray Sphere ripped him apart he had pulled himself back together. Asking why his former friend is there, Cole is weary as John says he "want to show you something" before touching Cole's forehead, mysteriously giving Cole the ability to see the plague when using Radar Pulse, and then disappears while asking Cole to follow him to the local Plague Ward.

When Cole arrives at the plague ward John tells him that there is one person in the ward with the conduit gene and asks Cole to find them. After finding the potential conduit, John tells Cole to cure her, if he can. Reaching down Cole tries using Pulse Heal but nothing happens. John then steps in and unleashes his powers to unlock the conduit's abilities, revealing himself to be "the Beast".

Knocked out of the plague ward by the "Ray Sphere" like blast, Cole lands on the sidewalk outside. Looking up, Cole see the newly awakened conduit walking towards him, cured of the plague, but at the cost of every other life in the plague ward. The new conduit thanks Cole before taking a giant leap into the sky and flying away, leaving Cole to consider what he just witnessed.

Reborn.
Add a photo to this gallery 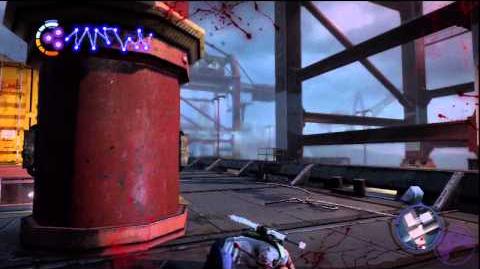 Story missions in Infamous 2
Retrieved from "https://infamous.fandom.com/wiki/The_Face_of_Change?oldid=110649"
Community content is available under CC-BY-SA unless otherwise noted.