Infamous 2
The Final Decision is the 37th and final story mission in Infamous 2.

Returning to Zeke's Roof with the RFI in hand, Cole prepares to finally activate it. Nix shows up with news that the Beast had just killed all of her pets, Cole then tells everyone that The Beast is John White, a former member of the NSA who was transformed into the Beast. Cole explains at John's motive is to cure the plague by activating everyone has the conduit gene, but killing off anyone who does not.

Cole picks the RFI and activates it, but it is revealed that the RFI was designed to kill every conduit alive, as Nix, Cole and Kuo had just discovered. Zeke manages to stop the RFI by hitting it with the Amp. Kuo becomes nervous due to what will happen when the RFI is activated, so she decides to join with John while Nix and Zeke want Cole to activate the RFI. Cole then has to make one final decision.

Cole decides to activate the RFI, abandoning John's plan and enraging Kuo. Zeke explains that the RFI was damaged and says that it needs to be charged via the substation at the Church. Cole and Nix then have to make their way down to the river into the Gas Works where the main substation is. When they get to the river, Laroche and the rest of the rebels are waiting for them, manning boats to allow Cole a safe passage across, John however makes it to the substation first and destroys it.

Zeke calls Cole and says that there's another substation at Smut Triangle, which Cole and Nix make their way to as The Beast is following, laying waste to all the Rebels and police who make a brave attempt to stop him and buy Cole and Nix time. They eventually reach the substation where Nix charges up the RFI and Cole protects it from The Beast who Cole manages to overpower, Kuo shows up to stop Cole as well but is quickly defeated. Nix, realizing there's not enough time to charge the RFI, sacrifices herself in order to allow Cole enough time to fully charge the RFI and bring an end to the Beast.

After Nix's demise, Cole runs back to the Church and charges the RFI completely, at the same time of fully charging himself.

Zeke tells him to turn on the RFI, but Cole decides to defeat the The Beast by himself, which he does and finally succeeds in bringing down the monster. Kuo shows up and explains to Cole that she's afraid of dying, but she then agrees to death. Cole then activates the RFI which kills off most conduits, but cures the rest of the world of the plague caused by the Ray Sphere.

Cole decides to join with Kuo and John in their plan to cure all the conduits of the plague. Zeke and Nix then threaten to hunt and kill Cole if they ever see him again, Cole and Kuo then meet up with John in Gasworks and plan to make their way to the Cathedral where the population is most dense. However, Zeke manages to cut the power of the entire city in order to sabotage their plan. John then amplifies Cole's powers so that he may survive without power.

After a while, Nix shows up with the unpowered RFI and starts to drain John of his powers, Cole then attacks Nix throughout most of the mission as she continually shows up in an attempt to kill John. They eventually make their way to the main Island of New Marais and discover that the Militia have joined forces with the Rebels to bring down Cole. John, incredibly weakened, can barely carry on, so Cole chases Nix to the top of the Church and fights with her one last time.

Nix engages Cole at the top of the Church to fight it out, continually she uses the RFI to weaken Cole. Cole eventually knocks her down and finally ends her, along with Zeke, who showed up seconds later to try and bring down Cole as well. John manages to safely make his way to the Cathedral but says that he is tired of killing. He then passes on his powers over to Cole, whom he knows will continue what he started. Cole then gains John's powers, thus becoming The Beast. 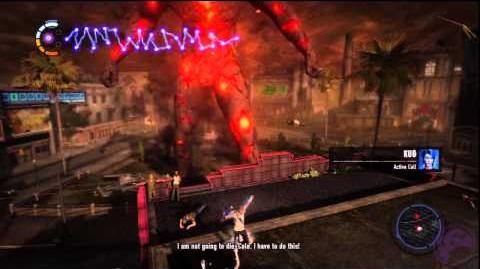 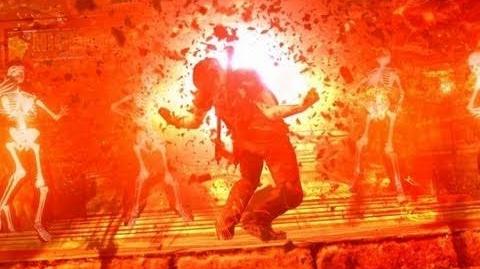