“Death by fire, the only thing you devils understand!”
— The Blast Shard Bomber

The Gauntlet is a side mission in Infamous 2.

Cole MacGrath is contacted by Zeke who informs him that the Blast Shard Bomber has agreed to give himself up. Cole says that its "such a bad idea" and Zeke warns his friend to be ready for anything. Arriving a the meeting place Cole finds another blast shard bomb, which promptly detonates, throwing Cole backward and seriously injuring him. As he gets to his feet he hears the Blast Shard Bomber taunting him before he runs off into the Gas Works.

Following his target, Cole must avoid the debris as the area is devastated by bombs left behind by the mad bomber.

“Touch me, we all go BOOM!”
— The Blast Shard Bomber

Making his way through a warehouse, Cole finally catches up with the bomber. Surrounded by civilians he warns Cole to step back, as he is wearing a bomb. Faced with this choice, Cole can drain the energy from the bomb, saving the civilians and Arc Restrain him for Good karma. Or Cole can either shoot the bomber, blowing up the bomb and killing the bomber and the civilians for Evil karma.

Destruction in the Gas Works

Capturing the Bomber
Add a photo to this gallery 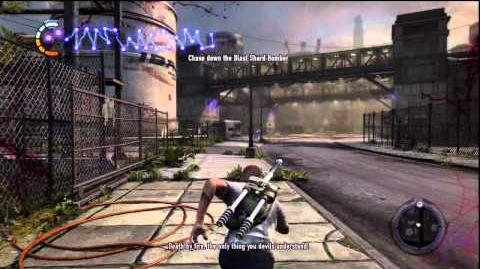 Side missions in Infamous 2
Retrieved from "https://infamous.fandom.com/wiki/The_Gauntlet_(inFamous_2)?oldid=110736"
Community content is available under CC-BY-SA unless otherwise noted.