“I tracked down a guy used to run the Militia death squads. He's dressed as a civilian, trying to leave town. Think you can handle it?”
— The unnamed man telling Cole of his target.

The Hunt is an Evil side mission in Infamous 2.

The mission begins as Cole meets the the Gangster a second time, who informs Cole that he knows a guy that ran the Militia's death squad once, and that he's dressed like a civilian, trying to flee from New Marais. He challenges Cole to go find him.

After receiving a picture of his target, Cole makes his way to a local park. After searching through the park, he spots the disguised Militia member, and quickly takes him out, killing him with his powers.

Searching for the target.

Cole, having found the unnamed man.

Taking down the disguised Militia leader. 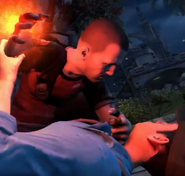 Bio Leeching the target.
Add a photo to this gallery

Side missions in Infamous 2
Retrieved from "https://infamous.fandom.com/wiki/The_Hunt?oldid=103588"
Community content is available under CC-BY-SA unless otherwise noted.