The Ray Sphere is the 32nd story mission in Infamous.

Cole and Zeke meet each other at the bottom of Alden's Tower and decide to make their way up to the top in order to get the Ray Sphere. Along the way, the duo discuss certain topics such as whether John or Moya is lying to Cole, Cole complaining that hes still "a damned errand boy", etc. Cole also fights off the Dust Men as he and Zeke scale the tower. Once Cole and Zeke make it to the top of the tower, Alden briefly talks to them before engaging Cole in combat with several Dust Men members. At the same time, Zeke attempts to grab the Ray Sphere from its perch but it is unfortunately locked down. After Cole defeats the Dustmen, Kessler shows up and taunts Alden while Zeke manages to yank the Sphere from its cradle, Zeke then decides to activate the Ray Sphere in order to give himself some powers. However, The Ray Sphere does not grant him any powers and switches itself off. Kessler then tempts Zeke into joining him so that Zeke can get the powers that he wants, so Zeke goes off with Kessler while Alden goes on a rampage into the Historic District leaving a dumbfounded Cole behind.

From the mission's starting point, get onto the overhanging pipes to begin the ascent up Alden's tower. Once Cole has made it to the side of the tower, head over to the fan nearby. Charge it up to raise Zeke's elevator and move forward. Continue climbing the structure. Several more fans will have to be charged before you reach the top of Alden's Tower. Once you reach the top, you must fight several Dust Men grenadiers and both kinds of Dust Men Conduit. 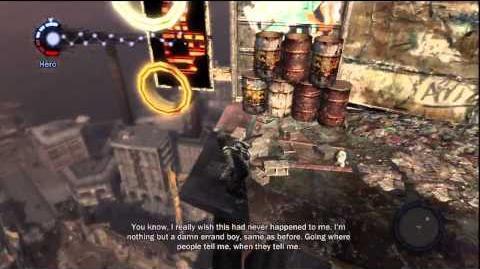 Story missions in Infamous
Retrieved from "https://infamous.fandom.com/wiki/The_Ray_Sphere?oldid=110434"
Community content is available under CC-BY-SA unless otherwise noted.