Help! Somebody, help me! Oh my God! Somebody help!
― The Sacrifice cries for help

Zeke informs Cole that the Militia have kidnapped a woman named Sara, and asks him to look into it. Heading towards the swamps, Cole fights his way through groups of swamp monsters before he finds Sara, who is

hanging between two twisted trees. Cole blasts her restraints, rescuing her. She then offers to take Cole to her Uncle Rosco Laroche, who is the leader of the rebels and is not afraid to fight the Militia.

Cole follows her back to the pier, protecting her from the attacking corrupted creatures and Militia members, who shout at Cole, justifying their actions, saying "That girl was an offering. Her death would have saved lives, you idiot!" Once Cole has cleared the way, Sara leads him through the back alleys of Ascension Parish, at one point finding a group of injured Rebels that the woman asks Cole to heal.[1]

Reaching Leo Park, Sara rushes into her uncles arms, but pulls away in shock when she learns that her uncle knew that the Militia were making sacrifices to the Devourer. Sara then introduces Cole to her Uncle Laroche. The Rebel leader is dubious at first, but as Cole tries to reach an agreement with Laroche, a large corrupted called a Devourer appears. Before fleeing with his niece, Laroche tells Cole that "You don't have to prove that you're brave. That things too damn big, even for you!" Facing the Devourer, Cole avoids it's acid spit and lethal tongue, attacking the beast at its vulnerable mouth, eventually bringing it down.[1]

Sara and her uncle, Rosco Laroche.

Sara and her "savior" Cole.

The Devourer
Add a photo to this gallery 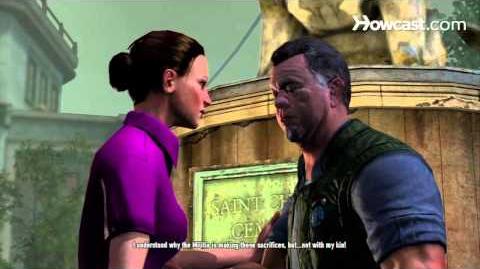 Story missions in Infamous 2
Retrieved from "https://infamous.fandom.com/wiki/The_Sacrifice?oldid=110655"
Community content is available under CC-BY-SA unless otherwise noted.