I thought I'd finished it.
This page needs to be expanded in order to include more relevant information.
The following is based on non-canon content and is not considered to be part of the Infamous continuity.
Template:Infobox mission

“Heard some Militia man likes to collect Blast Shards, I dunno where he's at, but his wife's over at the park. Let's go pay her a visit.”
— Bitch telling Poop how to get the Blast Shards.

The Third Degree is an Evil side mission found in inFamous 2.

Meeting up with Poop, Bitch explains how she found one of the Militia collecting Blast Shards. She adds that she doesn't know where the Militia member is, but his wife, Nadine, is in the park.

Poop, followed by Bitch, tracks down Nadine and Arc Restrain her. In her rage, she taunts Poop and tells him that what he's looking for is in a courtyard not far from where they are.

“You! You murdered my poor Nadine! I'll kill you!”
— Nadine's husband yells at Poop, before the fight starts.

Heading to the courtyard, Poop and Bitch find a packet of Blast Shards, however they are soon surrounded by a group of Militia members, lead by Nadine's husband, furious with the pair for what they did to his wife. Fighting together, Poop and Bitch quickly defeat the Militia.

A picture of Nadine. 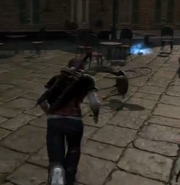 Poop, taking the packet of Blast Shards.
Add a photo to this gallery

Retrieved from "https://infamous.fandom.com/wiki/The_Third_Degree?oldid=44342"
Community content is available under CC-BY-SA unless otherwise noted.