Infamous Wiki
Register
Don't have an account?
Sign In
in: Rewrite needed, Missions, Articles in need of Images, Story missions in Infamous

Back to page
View source

1000 XP
The Truth is the 36th and final story mission in Infamous.

I've always been there Cole, every step of your life....
― Kessler begins the battle

After choosing to either destroy or reactivate the Ray Sphere, Cole will receive a call from his Kessler who will make a comment about the decision that Cole made. Kessler then informs MacGrath that he is waiting for him over at the Staton Building. Once he's there, Cole gets a good look at Kessler's aged face and realizes that the he was there when the Ray Sphere went off. Kessler then replies that he's always been there, every step of the Cole's life. The final battle then commences.

Compared to Sasha or Alden, Kessler is noticeably more powerful and his fight with Cole proves it. Bearing powers similar to Cole's, Kessler will push Cole to his limits in this grueling fight to the death. Early on in the fight, Kessler will grab Cole and execute a button mashing sequence similar to the one in Sasha's boss fight. Unfortunately, Kessler will easily overpower the Cole, as well as mock him. When Kessler's health bar is half depleted, Zeke will try to shoot at Kessler in an attempt to redeem himself for his previous choices. Not wanting anything to interfere in his battle with Cole, Kessler uses a shockwave to blast Zeke into the nearby ruined garage. Eventually, Kessler wears down and during a second button mashing sequence, Cole easily gets the upper hand and knocks Kessler to the ground, which is immediately followed by a Lightning Storm.

Reveling in his hard earned victory over Kessler, Cole can't help but crack a smile. Kessler then whispers "Trish, I love you. Please forgive me," and in an instant grabs Cole's face and shows him another vision. This one explains the reasons behind Kessler's extreme actions. The first thing Cole sees in the vision is a monstrous beast intent on destroying all life. In his younger days, Kessler had an opportunity to stop it, but chose to flee with his wife and children, evading Beast for years until he could run no more. After witnessing the deaths of his loved ones, Kessler in his mourning decided to use his powers to go back in time and change the course of history. After seizing control of the First Sons, Kessler accelerated the Ray Sphere's development and spends the next few decades plotting the Blast, the quarantine, and tracking down Cole himself all while being driven by a sole link to his past; a picture from Kessler's wedding when he married Trish with Zeke as his best man.

Cole's brain lurches as he struggles to absorb the fact that the man he despised was actually his older self trying to toughen him up to face the Beast. Going so far as to kill Trish so that his younger self would be strong and ruthless; the perfect mentality for making impossible choices during his eventual confrontation with the Beast. Kessler then collapsed, dying with the satisfaction that Cole was prepared to face the monster he himself couldn't face. Cole then walks away with Zeke, the rage curdling inside him. He still hates his older self, but he is determined that when the time comes, he will be ready.

Kessler's attacks are as follows:

Lightning Pillar: A two-handed horizontal lightning ray that will damage Cole, this is the attack that Kessler will use most. This attack can be either dodged or blocked with the Polarity Wall (however this does not recharge Cole). Kessler will utilize it either three or five times in quick succession, and then kneel on the ground for some time, resting. If he hits Cole, he will stop firing and utilize three Proximity Ball Lightning mines.

Proximity Ball Lightning: Kessler deploys three orange lightning spheres that work as proximity mines. Try to shoot them when Kessler is close to one,since it will damage him, or shoot it just to give yourself more room.

Shockwave: Kessler will teleport next to you and blast you with a powerful kinetic wave that knocks Cole off of his feet and takes away a small amount of health. Can be dodged.

Ground Tremor: Kessler will punch the ground, causing a tremor that rushes through the area. Getting hit causes Cole's health to go down. This attack can only be dodged by jumping over it.

Multiply: Kessler will make lightning-based copies of himself. If the clones get too near, they will damage or (on Hard) kill Cole. They can easily be brought down by a simple Lightning Bolt. Your own Shockwave will be useful to remove theme when they are close to each other. This attacks usually occurs in tandem with a Ground Tremor.

Grenade Bots Spawn: Not really an attack, but Kessler will summon three Grenade Bots to swarm at Cole. Taking these out first is advised before attacking Kessler. Destroy them with Lightning Storm altogether when they are spawned.

Tether: Also not that much of an attack. If Cole attempts to escape the fight, Kessler will use the tether to bring him back to the center of the crater, followed by a quote like: "You're not going anywhere."

About halfway through, Zeke will appear and fire shots at Kessler, telling Cole to make a run for it. Kessler will throw him out of the crater and into a nearby parking lot, yelling: "This doesn't concern you, fat man!" Zeke doesn't do any damage to Kessler, so his health will still stay the same.

﻿Combat roll the second the battle starts since Kessler uses 3 to 5 Proximity Balls. Cole can take some slight damage if you're quick. There are wires that are to be considered unlimited power supplies. Use them when you need them and combat roll Kessler's attacks when recovering. When he uses Lightning Pillar, quickly dodge all of them as if when you are hit, you are taken back to the mission start point. When you dodge them all, Kessler will rest to recharge. Use Megawatt Hammer as soon as he rests. These serve to be the strongest weapons that you can use on Kessler, and can do a fair amount of damage for each rocket. Recharge as soon as possible if he gets up or if you run out of energy.

At some points, Kessler uses Shockwave. You can see when he uses it; when he makes a fast sprint, he will use it, however it can be dodged. Again, when Kessler rests, this is your opportunity to give him some damage.

When around half of his health is depleted, Kessler will instantly use a Lightning Pillar attack. A button mash sequence comes in. You can't get to his face the first time, so don't even attempt to do it since it's impossible. Kessler will then say, "You're weak, all of this has been for nothing!" Zeke comes in and is blown away.

Kessler will then do a Multiply attack, saying that his mother is a liar and that she says that Cole's a teacher. Jump over the accompanying Ground Tremor and shoot the copies with Lightning Bolt.

At some point, Kessler summons three Grenade Bots. Taking these annoying enemies out quickly is recommended. When Kessler's health bar is empty, another button mash sequence occurs. However, this time you can move his hand without issues. When you succeed, Cole will then perform a powerful electric uppercut, sending Kessler flying back into the ground. Cole then uses Lightning Storm on him, yelling "Die!" A cutscene is triggered here, showing Kessler's secrets, then the credits come in. The very last cutscene will depend on your Karma.

In Hard, Kessler will do Lightning Bolt in the right place if you run, and can only be dodged by performing dodge rolls. The easiest way to kill Kessler in Hard is by activating the Ray Sphere, making your attacks more powerful. The four battery cores you gain will be crucial. Take the Grenade Bots out as soon as possible, and watch for Kessler's Shockwave. To dodge a Shockwave, watch Kessler do a slow sprint and then jump to supersonic speed. At this time, do a dodge roll. Don't try to use Lightning Storm, as Kessler will deflect it. However, do use Infamous upgraded Megawatt Hammer, as its six mini rockets will deal more damage.

Before doing the mission the player has two choices:

1. Be Good to concentrate in other missions, which will make it easier. However, Kessler's fight will be more difficult.

2. Be Evil to concentrate on Kessler's fight and Anything for Trish. Being Evil is the best way to do the game in Hard, due to all the benefits it offered.

After the credits for Infamous roll, the player is treated to an epilogue, which depends on what Karma they finished the game as.

I've never been more alone.
― Cole on the aftermath of the first game

Cole thought that once the Ray Sphere and Kessler were out of the picture, his life would go back to normal. However, the super hero life is his life, and there's no going back. As long as Cole lives, his electric powers will be his burden. Although the people in Empire City love and respect him, Cole worries about what will happen when he's expected to be there and he's not. In addition, Cole also has trust issues. Moya is still running around doing who knows what and seeing as how Zeke lost his trust, Cole doesn't know what to think of him. He then ends his speech by stating how he's never been more alone.

And no one is stronger than me!
― Cole boasting about his strength

The evil epilogue to inFamous opens with Cole cackling with glee over how he's made Empire City a wasteland by taking it down notch by notch and that it's never getting back up again. He then mocks Kessler's final message to him and adds that his powers are only good for taking what he wants whenever he wants. In a place with no law, the strong take what they please and the weak are their slaves. The epilogue then ends with Cole arrogantly saying that no one is stronger than him.

Zeke will still be where he landed, after the mission ends. He will stay in this spot (leave the area and he will go away) and shooting him wont effect him. 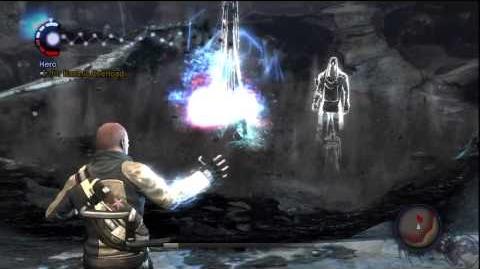