Yes (Concrete and Video only)

For the almost identical power in inFAMOUS 1 and 2, see Static Thrusters.

In Infamous: Second Son, various forms of thrusters have been introduced to accommodate the different powers. The thrusters are Delsin's form of Cole MacGrath's Static Thrusters, which only used electricity.

This power allows Delsin Rowe to glide over a great distance by shooting whatever power he has out of his hands. It can also be used after Delsin shoots himself into the air, gaining more height and the capability to glide much further. 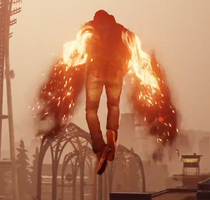 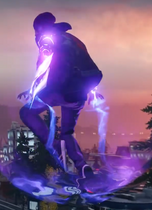 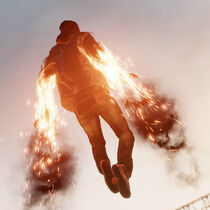 Evil Delsin uses Smoke Thrusters
Add a photo to this gallery
Retrieved from "https://infamous.fandom.com/wiki/Thrusters_(Second_Son)?oldid=105164"
Community content is available under CC-BY-SA unless otherwise noted.