Start a Wiki
The following is based on non-canon content and is not considered to be part of the Infamous continuity.

"Titanic Beatdown" is an evil side mission found in the Historic District in Infamous, in which Cole takes on a group of First Sons and Dust Men.

“Annihilate them! Wipe them out!”
— Sasha reaches out.

Sasha contacts Cole telepathically, telling him about a fight taking place between the "Cursed First Sons and the Transients". Sending three Reaper Conduits to aid him, Sasha asks him to "Wipe them out!"

Traveling across the roofs of the Historic district to Ground Zero, Cole is confronted by three Aura Conduits and two Golem Conduits, as well as a squad of Grenade Launching Drones. Working with his allies, Cole defeats his enemies, clearing them from another part of the city. 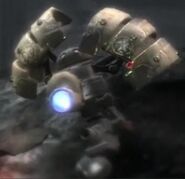 Side missions in Infamous
Retrieved from "https://infamous.fandom.com/wiki/Titanic_Beatdown?oldid=105647"
Community content is available under CC-BY-SA unless otherwise noted.