Titanic Justice is a good side mission in Infamous found in the Historic District in Infamous, in which Cole takes on a group of First Sons and Dust Men.

Normally I‘d gladly sit back and watch those idiots beat the hell out of each other, but there are too many innocent people around there. Put a stop to the fight.
― Warden Harms calls Cole.

Warden Harms phones Cole to inform him of a fight taking place between the Dust Men and First Sons at Ground Zero. He says that they have to be dealt with before the innocent civilians around the area become involved. Making his way over the rooftops of the Historic District Cole quickly arrives at Ground Zero, and is faced with a multitude of Dust Men and First Son troops, including several Aura Conduits and Golem Conduits. Also flying around the area are numerous Grenade Launching Sentry Drones, making the fight even more difficult, fortunately for Cole several members of the Empire City Police Department arrive to help him.

With the police assistance, Cole defeats the two warring factions, restoring peace to the area.

Cole receives backup from the ECPD. 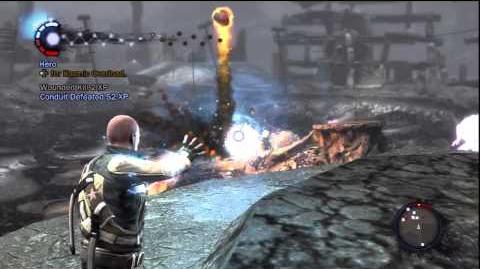 Side missions in Infamous
Retrieved from "https://infamous.fandom.com/wiki/Titanic_Justice?oldid=105439"
Community content is available under CC-BY-SA unless otherwise noted.