100 XP
"Tough Collar" was a Good karma side mission in Infamous.

Can you capture him for us? We need him alive
― Empire City Police Officer.

Cole encountered an Empire City Police Officer who told him about a Reaper Conduit that the police force have been trying to “bring down.” He asked Cole to capture the Reaper, giving Cole an opportunity to try out one of his new powers, such as Arc Restraint.

Cole quickly managed to track down the Reaper Conduit, who had a gang of regular Reaper troops accompanying him. After taking down the Reaper troops first, Cole made his move on the Conduit, making sure to only knock him down. He was to only restrain him so the police would have the opportunity to interrogate him later.

Reaper takedown.
Add a photo to this gallery 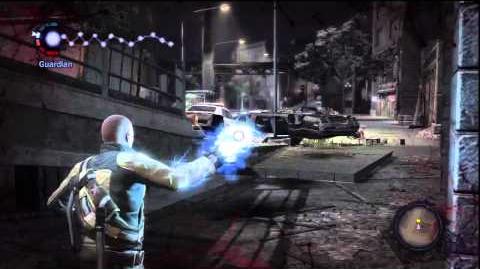 Side missions in Infamous
Retrieved from "https://infamous.fandom.com/wiki/Tough_Collar?oldid=105643"
Community content is available under CC-BY-SA unless otherwise noted.