“Hey, I rigged up a camera that won't fry when you touch it. I was hoping you could send me back some useful intel. Let's make sure it works.”
— Zeke telling Cole about his mission.

"Tourist trap" is a picture-taking side mission in Infamous 2.

Zeke contacts Cole and presents him with a camera he has designed that is able to withstand Cole's electricity. He claims the camera to be pretty useful and briefs him on what to take pictures of.

First, Zeke tells Cole to snap a picture of electrical objects that didn't have back in Empire City.[1] He snaps a picture of a vertical launch pole. Zeke then informs him that the Militia has been mugging people at gunpoint and has him snap some evidence of it before he puts an end to it. Lastly, Zeke informs him that the Militia are snatching people off the street, and tells him to snap a picture of that as well before he deals with them. Once the three pictures are taken, Zeke compliments Cole on his pictures and tells him to keep the camera, because they'll need it again soon.

Third picture: abduction
Add a photo to this gallery 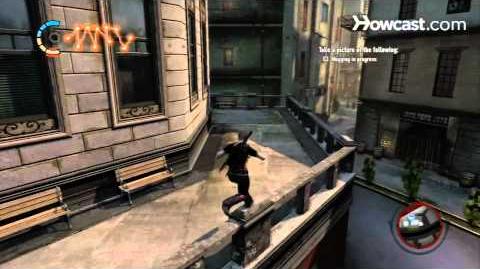 Side missions in Infamous 2
Retrieved from "https://infamous.fandom.com/wiki/Tourist_Trap?oldid=105705"
Community content is available under CC-BY-SA unless otherwise noted.