Stories Of The Past

Transferring Power is the 18th mission of Infamous 2 and hosts two Karmic Missions: Hearts and Minds Campaign and Fooling the Rebels.

After receiving a call from Zeke, Cole heads back to the roof over-looking Smut Triangle. Once there, Zeke announces to Cole, Kuo and Nix that he has learned that the Transfer Device had been moved to Fort Philippe.

Kuo is visibly upset by the news, Cole asks if she's ok, but it is Nix who replies, stating that Kuo is just upset because "Bertrand copied her powers onto a bunch of nobodies". Kuo declares that the device has to be destroyed, but Nix quickly jumps in, stating that they should keep the machine for themselves. The discussion soon turns into an argument between the two before Cole points out that they won't be able to do either of these things due to the fact that it would take an army to secure and search the fort.

Break it, use it, it doesn't matter if we don't get the damn thing.
― Cole breaks up the argument.[1]

Kuo suggests that Laroche and his Rebels could help them take the fort and steal the device, proposing that they could give them some medical supplies to help cure the plague. Zeke explains that he has made a map of the Militia's patrols and suggests it could help.

Once Kuo and Zeke have left to work out their plan, Nix belittles Kuo's plan, stating that they need the rebels to be dependent on them. Announcing that a better plan would be for her to dress up as a Militia and go on a "ass kicking spree", at which point Cole could swoop in and save the day, making himself a hero in the rebels eyes.

Choosing Kuo's plan leads to Cole helping to deliver an ambulance full of medical supplies to the Rebels. Protecting the ambulance whilst Kuo drives, the pair laugh at Nix's plan, Cole joking that Nix's plan was "straight out of a comic book". When they arrive at the Rebel's hiding place, Laroche calls Cole, and berates the pair for leading the Militia directly to the rebels' hideout. Kuo and Cole help the rebels defeat the Militia members, which creates a trust between the Rebels and Cole, and guarantees their assistance in storming Fort Philippe.

Choosing Nix's plan will lead to Cole and Nix slaughtering many Rebels in order to gain their trust. Cole takes out several Militia members as he makes his way to the forts PA system where he broadcasts a loud message to the Rebel members. At the same time, Nix steals a Militia uniform and mans one of the fort's turret guns, turning it on the Rebels in the street below. Cole then arrives, destroys the turret and protects the Rebels, gaining their trust. Laroche calls Cole and thanks him, telling him that he had done a great thing. He then agrees to help Cole storm the fort.

Kuo, upset at news of the device. 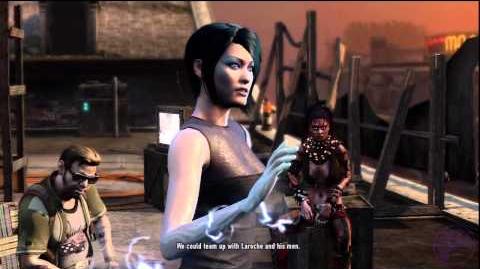 Story missions in Infamous 2
Retrieved from "https://infamous.fandom.com/wiki/Transferring_Power?oldid=110974"
Community content is available under CC-BY-SA unless otherwise noted.