Trish Dailey was Cole MacGrath's ex-girlfriend, who lived and worked in Empire City as a nurse prior to The Blast.[1]

Trish Dailey was born in Empire City, she grew up alongside her younger sister Amy. At some point in her life, she met a bike messenger named Cole MacGrath and started dating him.

One day, unbeknownst to Cole, a package he was hired to deliver contained a timed bomb that caused a large, catastrophic explosion at the event of the opening of the package, an event later known as the Empire City Blast. Cole, who was at the epicenter of the explosion, was heavily injured, but was nursed back to health by Trish within a matter of days.

While Cole lingered in a coma, it came to Trish's realization that her sister Amy had died after the Blast occurred. After waking up for the first time in days, Cole's heart suddenly stopped, sending both Trish and his friend Zeke into a panic. Cole, however, had awoken with electrokinetic powers, which scared both him and Trish.

Trish began to worry about Cole, especially since the loss of her sister. Two weeks post-Blast, the government dropped food in Archer Square to aid Empire City.[1] As she met with Cole there, the local pirate broadcaster, "Voice of Survival," began to blame Cole for being "the terrorist" and the cause of the Blast. Trish then immediately lost faith in Cole, believing him to be responsible for her sister's death, walking away and ending their relationship.[1]

Later, the Reapers poisoned the water systems of the Neon District with their Black Tar, and, being a doctor, Trish attempted to help the poisoned victims. Cole came to her aid multiple times in an attempt to regain her trust. Though she was originally dismissive, she allowed Cole to help her. After Cole destroyed a truck filled with the poisonous tar, the Reapers focused on infecting the water systems with their tar. Trish blamed Cole for this, but later came to her senses and asked Cole to help her guard a crate with medical supplies until she could pick it up.[1]

Later, Trish asked for Cole's assistance in escorting her armored bus to the Bayview Hospital because the Reapers believed her to be allied with the Dust Men. When they arrived at the hospital however, Alden Tate was waiting for them. Using his telekinesis, Alden lifted the bus with Trish still inside, and threw it onto the roof of the hospital. Cole battled through dozens of Dust Men as he raced to the top of the building to rescue her. Immediately after saving her, Trish told Cole that she wanted to forgive him, because she knew he wasn't responsible for Amy's death. This was a major turning point in Trish's attitude towards Cole.[1]

I buried her in the park, alongside others who'd died since the Blast.
― Cole, on Trish's demise.

Trish was later kidnapped by Kessler. Suspending her from a building, Kessler gave Cole a choice; he could either save six doctors, or save Trish. In the end, however, Cole chose to save the doctors for the greater good, at the cost of Trish's life. Cole was only able to bring her back to life for a few more moments for Trish to tell him that she was proud of his actions and choices for the city, and was happy to see all the good he had done.[1]

Cole then proceeded to bury her in Memorial Park, in the Historic District, and swore revenge against Kessler for her death.

Cole continued to grieve over Trish's death, regretting his inability to save her weeks prior. Cole vowed to kill the remaining members of the First

Sons, as they played a huge part in her death under their allegiance with Kessler.[1]

Later on, Moya Jones, wanting to capture Cole, used Sasha's toxin as her own weapon by creating an illusion of an angry Trish Dailey. Trish asked Cole why he wasn't able to save her, and accused him of being a murderer. While the illusion was a fake and merely a mind game, it subdued Cole to the point of being captured without a struggle. Cole, in tears, apologized to Trish for not being able to save her. Luckily for Cole, Sasha of all people, was able to prove to him that the hallucination wasn't real and allowed him to escape.

After a month, the Beast attacked Empire City. Cole, unable to defeat the Beast, watched in a broadcast as the city was blown to bits, including Trish's grave.

Trish's death continued to haunt Cole during his time in New Marais. When Zeke briefly mentioned her, Cole blamed himself for her death, saying that Trish saving him got her killed.[1] After her death, Cole also sported a tattoo as a tribute to Trish: a caduceus (the symbol of the American medical profession) with her initials (TD) rendered in Gothic script.

In one of Lucy Kuo's transmissions to Wolfe, she admitted she had intended to seduce Cole into coming to New Marais, but gave up on the idea after seeing that he still grieved for Trish, and was willing to come to New Marais anyway to prepare for his battle with the Beast.

In Kessler's timeline, it was revealed that she married Cole and they both had two unnamed daughters. Trish and the girls, however, were later murdered by the Beast after years of fleeing around the world with Cole while the Beast destroyed it. In an act of vengeance and guilt, Cole took the name Kessler and took a one-way trip back to the past to prepare his past-self and prevent the Beast from destroying the world, going as far as to kill the woman he loved, Trish.

In an alternate timeline where Cole descended into evil and continued to make Empire City even worse, Trish continued to despise Cole and what he had become. When Trish was thrown onto the hospital roof by Alden and Cole rescued her, Trish criticized his evil and selfish actions, killing civilians and undoing all the good she had tried to do. When Cole was given the choice to save Trish or the six doctors, he decided to save Trish, however, unknown to Cole, she was among the six doctors, who fell to their deaths instead. Able to bring her alive for a few mere moments with his powers. In Trish's final moments, she said she was ashamed of what Cole had become, finally dying despising Cole.

Trish, as seen in a cutscene.

Trish, when Cole discovered his powers. 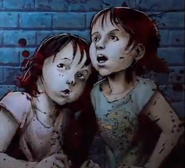 Trish, moments before her death. 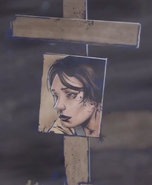 Picture of Trish on her grave.

Trish, breaking up with Cole