The player can filter the UGC, or User-Generated-Content, making only certain missions show up at a time. UGC can be accesed at any time, during the game, and by playing the game the player will unlock new NPC:s, objects and more, to use in the Mission Creator. In Festival of Blood players are allowed the option to create Comic Scenes which, as the name suggests, are frame-by-frame scenes that are similar to pages of a comic book allowing customization of camera angles, character poses, speech balloons, and more.[1]500px|right 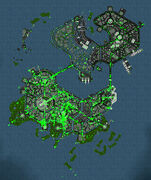 Retrieved from "https://infamous.fandom.com/wiki/UGC_Missions?oldid=41294"
Community content is available under CC-BY-SA unless otherwise noted.