“Don't worry, I'm not like the others. I was coerced into becoming a lab rat. The rest of them are inhuman brutes. I will help you stop them.”
— The Ice Gang member convincing Cole.

"Unlikely Allies" is a Good karma side mission in Infamous 2.

Cole is contacted by Kuo, who informs him about a member of the Vermaak 88 who wishes to join forces with them, and tells Cole that this unlikely ally wishes to meet him on a nearby rooftop in Flood Town.

The mission starts when Cole talks to the Ice Soldier, who tells Cole not to worry, and that he's not like the others, who he describes as "inhuman brutes." He then offers to help Cole and proposes to lead him to the location of where the Vermaak 88 have hidden a stash of Blast Shards. Cole follows his new ally across the roofs of Flood Town, and at one point, the pair are ambushed by a group of Corrupted, but once they have taken care of the threat, they press on.

Having lead Cole to the Vermaak's hideout, the Ice Soldier advises Cole that to be of greater help in the future, it is important for him to stay anonymous, leaving Cole to defeat the Forced Conduits alone. Once the soldiers are dealt with, Cole can take the five Blast Shards, concluding his first mission with his Ice Soldier Ally.

To keep up with your ally, just make good use of Cole's Ice Launch and Static Thrusters. Cole's Ice Grenades and Ionic Freeze to defeat the enemies you encounter throughout the mission. 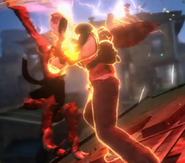 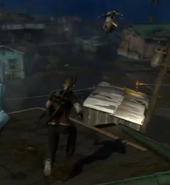 Collecting the Blast Shards.
Add a photo to this gallery

Side missions in Infamous 2
Retrieved from "https://infamous.fandom.com/wiki/Unlikely_Allies?oldid=105716"
Community content is available under CC-BY-SA unless otherwise noted.