“Before the blast, they were just a bunch of junkies dealing drugs... now, they own the Neon District, taking whatever they want.”
— Cole MacGrath's description of the Reapers

The Reapers were a faction that appeared in Infamous, Infamous: Post Blast, the comics, and Infamous Anarchy.

Led by former scientist and Conduit Sasha, they were a faction of thugs, criminals, and drug dealers that operated in Empire City. After the quarantine was erected, the group grew rapidly in both size and aggression. In a short time, they were able to take control of the Neon District, and they ran the district until their downfall at the hands of Cole MacGrath.

Before the day of the Blast, the Reapers were just a group of drug addicts, hooligans, and petty criminals dealing drugs and creating minor crime around Empire City. Right after the Blast, they formed into a more orderly group and gained control over the Neon District through hostile means. Their sense of unity was majorly a by-product of the black tar, a substance created by Sasha, capable of mind-control over any individual that happened to consume or otherwise absorb it into their bodies in any way. After they gained control, they added to their ranks by kidnapping civilians and forcing them to ingest the tar.

Under Sasha's command, the Reapers made plans to expand their ranks through the use of force and deception by contaminating Empire City's water supply; tinkering with the water system and pumping in the black tar. They used several techniques to infect the general population. These techniques included pump kegs mounted on water towers,[1] an armored tanker truck that pumped the tar into the main water system beneath the bridge and through the use of the city's valves,[2] and holding civilians in captivity whilst spraying them with the tar.[3] They were successful in poisoning an uncounted number of civilians, but through the combined efforts of Trish Dailey, Cole MacGrath, and the Neon's surviving doctors, the poisoning gradually slowed until it had been stopped all-together, stalling a major part in the Reaper's operations.

Other than contaminating the water supply, the Reapers had performed several other crimes and operations to try and keep the citizens of the Neon in check, such as installing dozens of security cameras on some of Empire City's houses, or keeping a large group of civilians hostage within the Neon's trains, which were all foiled by Cole.[4] After destroying the Reapers' operations and resources around the Neon, Cole was finally tasked with confronting Sasha. As he navigated through the Jefferson Tunnel, Cole encountered heavy resistance from the Reapers and the black tar itself, due to its hallucinogenic properties. Despite the partial dementia from the tar that he had to endure, Cole was able to subdue the nearby Reapers and then made his way further into the compound.

After freeing some of the civilians that he found being infected by black tar, Cole ventured into the heart of the compound, where Sasha awaited. After a few taunting words, Sasha then stood, and the two engaged in a lengthy battle. Sasha used her control over the tar and its negative side-effects on Cole to her advantage. In the end, Cole subdued Sasha and was about to force some information out her, regarding the First Sons. However, an explosion tore through the room, causing debris to fall everywhere and land directly on top of Cole, temporarily trapping him. Cole, pinned by debris, saw Sasha being taken away by a mysterious professional group that had been the source of the explosion. Left with no way back to the Neon District, Cole went forward into the slums of the Warren. After that conflict, the Reapers' morale was heavily degraded, and the group was left largely leaderless. Despite losing their leader, the Reapers continued to function and could still be seen around certain areas of Empire City. However, their numbers would decrease as Cole and the Empire City Police Department continued to exterminate their forces.

It was later revealed that Sasha was rescued, yet kept prisoner by none other than Kessler and the First Sons. She was being used so they could extract the black tar from her, which was used by Kessler for his own faction's benefit. Sasha was able later to escape captivity and returned to the Reapers, which made them active again. Moya Jones and the NSA later attacked the Reapers in their new obscure base and abducted Sasha. Shortly after Kessler's death, several Reapers attempted to defend Sasha from Moya's forces, but they failed to defend their leader and were killed.

Later, after the death of Moya, a defeated Reaper was seen in Cole's hands as Lucy Kuo entered Empire City. What happened to the remnants of the Reapers is unknown, but it is likely they were all killed when the Beast destroyed the city.

The Reapers had a wide range of offensive and defensive equipment at their disposal, which included the following:

The Reapers consisted of different "ranks" that could be fit in these categories: Basic Reapers, Heavy Reapers, Mad Bombers, and Conduits.

The Reapers, along with the other gangs that took over Empire City after the city had been quarantined, were usually in conflict with each other as they all wished to take over the entire city.

Several Reapers after the Blast.

A Reaper attacks a civilian.

A Reaper using a riot shield.

A Reaper using a shotgun.

A Reaper with a mini-gun.

A Reaper using an RPG. 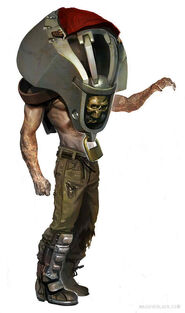 Early concept art of the Reapers. 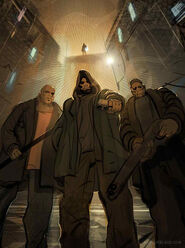 A Reaper being a victim to Cole's Bio Leech attack. 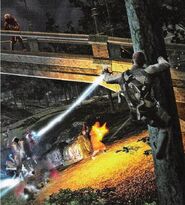 Cole attacking some Reapers whilst hanging on a tree.

A Reaper Conduit is about to activate its devastating shockwave. 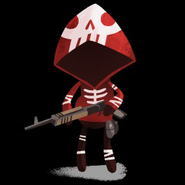 Infamous
Retrieved from "https://infamous.fandom.com/wiki/User:RB1196/Sandbox/Reapers?oldid=107416"
Community content is available under CC-BY-SA unless otherwise noted.