Vengeance is the 35th mission and the final substation mission in Infamous.

John White asks for Cole's assistance, he wants to restore power to the Historic District. Cole heads into the sewers once again, and after taking down a group of First Son soldiers, he completes the electrical circuit and receives a final power, lightning storm. Realizing he needs to be above ground to test out his new power, Cole makes his way to the exit, defeating the remaining First Sons he encounters in the sewer.

Moya: "Cole we need to talk. I know what John’s been telling you."
Cole: "I got nothing to say to you Moya. You’ve been lying to me from the very beginning."
―Moya makes contact.

As soon as Cole climbs out of the sewer, a First Sons turret truck pulls into the street before him. Unleashing his new power, calling lighting bolts from the sky above, Cole destroys the truck. However, before he has chance to celebrate, two more turret trucks arrive. Learning more about his new powers, Cole once more calls forth a lighting storm, and directs it, first to one truck, then the other. Making his way to the first substation, Cole receives a call from Moya Jones, she tries to explain her actions, telling him that she couldn't let the ray sphere fall into the wrong hands, but Cole brushes her off, accusing her of lying from the start.

Reaching the first substation Cole hears from John White, he informs Cole that, due to the age of the substations, it will take time for them to power up. Defending the substation John asks Cole how much Moya knew about him, when Cole asks if it's important, John explains that, if she knew about his undercover work, then the NSA could be compromised. Arriving at the second substation Cole tells John they can deal with the other stuff once they've taken care of Kessler.

Once again defending the substation till it is fully charged, Cole makes his way to the final substation and receives a third call. Kessler begins by telling Cole that he “saw what you did for Trish. Believe it or not, I know how hard it is to bury someone you love. Especially someone as special as Trish”.

Cole replies angrily, telling his adversary that he will kill him, promising that he will tear him apart. Instead of arguing, however, Kessler actually hopes that Cole keeps his word, advising Cole that he has “been at this for a long time” and that he is tired. Defending the final substation, Cole is attacked by wave after wave of First Sons, eventually defeating them before the power is finally restored to the Historic district.

There shall be power! 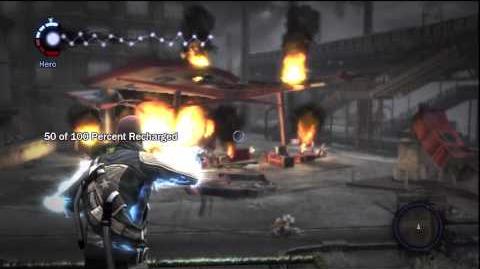