Vermaak will be whole!
― A recurring phrase, shouted by the Vermaak 88.[1]

Vermaak 88[2](often referred to as The Ice Gang, The Ice Freaks, or The Ice Soldiers) is a very large and powerful South African based Private Military Company hired by Joseph Bertrand for experimentation, initially for protection. It is reported that Vermaak 88 had extended 43 percent of its operations in the last five years and had become one of the largest Private Military Contractors in the world due, in part, to lucrative government contracts with the United States Military during the War in Iraq.[3]

The organization had paid Joseph Bertrand III to become test subjects in his experiments with making Forced Conduits, hoping to use their new powers to utilize on the battlefield and increase their skills. Unknown to the Vermaak soldier test subjects, Bertrand planned to use Vermaak for his own benefits. When Vermaak were transferred to New Marais, where the experiments were to be held, Bertrand kidnapped Lucy Kuo, and brought out her Conduit abilities through experiments. Bertrand had her strapped into the Power Transfer Device and unlocked her Cryokinesis abilities and transferred them into Vermaak 88. The process was successful as all Vermaak soldiers gained her Cyrokinesis powers.[1]

Though gaining Cryokinesis abilities, they only gained a fraction of Kuo's powers. The Vermaak were then stored in cells, keeping them contained, preventing escape and allowing Bertrand to carry out his true plans for the Vermaak.

Cole later broke into the facility used to contain the Vermaak to free a captured Kuo, though accidentally deactivating 88's cells as well. With this, Vermaak soldiers broke free from their cryogenic containment cells.

Vermaak troops escaped in rage and began to engage the Militia standing guard. Subsequently, the Vermaak soldiers scattered across New Marais areas such as the St. Charles Cemetery. Though pursued by Militia, Vermaak was able to easily evade them.[3]

Ever since you busted them out of that underground lab they've been acting crazy, attacking everyone they come across in Flood Town.
― Zeke Dunbar on Vermaak's actions.

Vermaak soon assembled together and established themselves in Flood Town. As Sebastian Wolfe predicted, Vermaak wore their bodies out trying to sustain the powers they gained, and descended into insanity. The Vermaak, however believed Blast Cores would make them sane again and began looking for them. They were eventually successful in finding one, but had failed to obtain it.

Vermaak continued to rampage in Flood Town. Resorting to terrorizing and mugging civilians, taking hostages, stealing medical supplies, and capturing groups of Militia. A defecting soldier from the 88 however, established contact with Cole. The soldier lead Cole to several Blast Shards, thus starting an alliance. Soon Vermaak became prominent in the Gas Works, where they covered most of the district.

They then began to descend further into insanity as feared and reached higher stages of mutation, a side affect of gaining their powers. When John White, now known as the Beast, was near New Marais, many Vermaak soldiers fought him as he approached the city, though this proved unsuccessful.

Soon, the defecting Vermaak troop and Cole rampaged through the warehouses and killed many Vermaak soldiers in the process. The Vermaak were able to secure several Blast Shards for themselves, and a Blast Core, however, they were stolen by Cole, thwarting many of their operations.[1]

The Vermaak, however, were soon ready to become a part of Bertrand's ultimate plan: Vermaak troops, along with Corrupted, were being held in cryogenic containment and were to be sold and shipped all across the world by Bertrand to wealthy warlords, allowing them to use the Forced Conduits in the battlefield. Nations would soon start fighting for control over the Forced Conduits, kick-starting a new arms race in the process and causing a conduit genocide.[1]

With hundreds of Vermaak soldiers already being loaded onto cargo ships in the New Marais harbor, Bertrand was ready to have them transported across the world until the boat engines were dismantled by Cole, greatly sabotaging Bertrand's plan. Meanwhile, the defecting member of Vermaak 88 eventually lost his sanity also and started rampaging through New Marais harming civilians but he was finally killed by Cole MacGrath and Lucy Kuo and the NMPD.[1]

The one walking around with the Blast Core is their leader.
― Zeke Dunbar on the Vermaak General.

Still having one Blast Core left in their possession, Vermaak's leader, the General, attempted use the core to make the Faction "whole" by putting the core on top of the ice tower and waiting next to it until a storm activates it. However, his plan failed, as Cole attacked the last hideout of the Vermaak (while draining power from the storm, making him nearly impossible to defeat). The Ice General then fled with the Blast Core, and in the process was close to death. Choosing his life over the core, he initially changed his plan, and encased the core slightly into the tower so Cole wouldn't be able to take it. Cole proceeded to activate the burner of the tower to melt down the ice, which caused the core to fall into a swarm of Ice soldiers. Cole proceeded to kill every Vermaak soldier around the tower, ranging from every type of Vermaak (Crusher, heavy, titan and normal), and retrieved the blast core.

Despite their failures against Cole, Vermaak remained active in New Marais, continuing to terrorize certain areas of New Marais. After Cole activated the Ray Field Inhibitor, however, the majority of Vermaak as well as the Corrupted and mostly everyone on Earth with the Conduit gene were killed, ending the Faction.[1]

In an alternate timeline, Cole instead sided with John White and decided to create a world of Conduits. With this, Vermaak 88 remained partly active in New Marais, though their eventual fate was uncertain.[1]

The Vermaak 88 consisted of different "ranks" that could be fit in these categories: Ice Soldiers, Ice Heavies, Crushers and Titans.

Concept art of what would later be the standard Vermaak 88 infantry design.

Concept art of the Ice Heavy.

Concept art of the Ice Golem (later known as Titan). 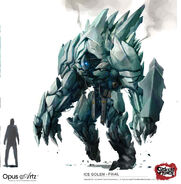 Another variation of the Ice Elite.