The Warren was one of three boroughs in Empire City, and the second one the player unlocks in Infamous. Cole unlocks this after fighting off Sasha's Reapers within the Neon District.

The Warren was considered the slums of Empire City. As the Warren mainly consists of run-down buildings and a large shanty town built on what used to be the district's park, not many people visit by choice. On top of that is the army of heavily armed Dust Men who used to be the city's homeless element and now have an unchallenged rein within the Warren's streets.

Within the aftermath of The Blast, since most of the police force had abandoned the district, the Dustmen salvaged whatever junk and scrap they could get their hands on and built their own fortified shanty town, with a huge tower at its heart. They also constructed a much smaller fort on the western shore of the Warren, its walls made out of cargo containers from the nearby loading docks. Within one of the story missions, Cole has to fight through this maze to rescue his friend, Zeke Dunbar, who was kidnapped by the Dust Men when he arrived in the Warren.

After defeating many of the Dust Men, Cole reaches the lever to lower Zeke's cage. The Stone Canal draw bridge was lowered by two helpful engineers, Roger, and Lou who Cole protects while they fix it, allowing traffic to freely pass between the Warren and Neon districts. A couple of times after this, the Reapers and the Dust Men exchange in firefights.

It appears to be based on the Bronx in NYC. This district appears to be the slums of Empire city containing either homeless people or citizens living in low-income apartments and houses. This area also seems to have been an industrial area as some of the buildings appear to be warehouses or factories. The Warren serves as the shipping center for Empire city, containing a large shipping yard and many more docks than the other districts, making it the main district for people arriving at the city through the sea. Here you can also find some of the city's more important functional facilities including its hospital and prison, also two of the tallest buildings in the city.

Since the Empire City blast, there have been some additional structures created by the activities of the dustmen. This includes a makeshift fortress made of stacked up shipping containers near the shipping yard, a second base made of various pieces of scrap metal and other garbage built in/over what was the Warren's park, and a large tower made of even more scrap metal and larger junk which serves as the dust men's leader, Alden Tate's, seat of power over the district.

Tent City is the unofficial name coined by Cole for the Dust Men's massive junkyard complex within the Warren. It is a similar yet marginally smaller base where Alden Tate took Zeke Dunbar after he captured him. Cole enters Tent City to steal the Ray Sphere from Alden, along with Zeke. Cole encounters a Golem for the first time in the central square and faces off against Alden and the Dust Men at the top of the nearby tower of junk, facing Golems and extra Dust Men reinforcements. Zeke gets his hands on the Ray Sphere and activates it to gain his own powers. When nothing happens, he heads off with Kessler and the entire tower collapses.

Tent City is still accessible to Cole after the tower's destruction, if only to find the numerous Blast Shards hidden within, which, specifically, are thirteen. He also refers to it as a Shanty Town made of trash.

Valentine Park is a local park that can be found in the Warren. Cole goes to the area to meet with Roger Miller, but found the area overrun by Dust Men. After Cole cleared the area, civilians were able to visit the park once again.

The Examiner Building was an old building located at the central area of the borough. The faction First Sons carried the Ray Sphere to the said location for protection, but was compromised after agent John White dropped a very deadly and toxic chemical unto the building. After the drop, the faction moved by the harbor of the Historic District.

The Eagle Point Penitentiary (also known as Empire City Penitentiary), was a large prison located in Empire City. It is run by the 43rd Precinct of the Empire City Police Department. They are only found in the Warren and are always on patrol near the outside walls of the facility.

As the largest and only prison in Empire City, Eagle Point penitentiary took over a massive portion of the Warren District. The prison spanned over several floors and included a wing that had been built over one of the areas main roads. The main buildings generators were found on its roof, and there was a large exercise yard and secure visitors entrance with parking next to the complexes main gate. The whole building had suffered severe damage due to the explosion cause by the Ray Sphere. During the mission Alden in Chains, it became even more damaged, due to the Dust Men attack.

Eagle Point Penitentiary was the third largest building in Empire City, next to the Staton Building and Alden's Tower. Cole visited the penitentiary on many occasions following the Empire City Blast, as one of the largest areas in the city the Empire City Police Department had held, the jail was a focal point for their attempts to regain the city. Warden Harms contacted Cole on a number of occasions, requesting his assistance in transporting Dust Men prisoners to the penitentiary.

Eagle Point penitentiary was also home to Alden for a short time, after Cole and the police worked together to bring the Dust Men's leader to justice. His incarceration was short however, as the Dust Men soon attacked the prison, intent on liberating their leader. Cole and the police tried to keep Alden secure and him men at bay but due to a mistake on Zeke's part, the dangerous conduit Alden, was able to escape, killing many police officers in the process. After the Dust Men attack there was significantly more damage to the penitentiary, with massive holes in the yards wall, and the destruction of the caged walkway.

The Containers Area is an area composed primarily of containers. The fort is heavily guarded. Turrets and chain-link fences line the outside, while inside there is barbed wire, Scrap Crabs, and many Dust Men Conduits. Cole MacGrath is first confronted by a Dust Men grenadier in this area during the mission "Alden Strikes", in which Zeke is held hostage in a cage hung above the area, and Cole penetrates the container maze in order to save him.
Later, Cole infiltrates the area again, following the electrical echo of a scrap crab, responsible for the death of an Empire City resident.

There are many traps set for intruders including several shipping containers with drop down sides that the Dust Men emerge from to ambush Cole and sections of the ground that are covered in oil that is set on fire as Cole progresses through the maze, though this can work to Cole's advantage. It is possible to access the area prior to the "Alden Strikes" mission. The easiest way to do so is via the pillar closest to a wall at the nearby tunnel. The simplest way to get out of the area is via one of the cranes.

The Bayview Hospital was very old and tall, and it was damaged mostly at the bottom. It also seemed to be heavily guarded, as Transients were often seen patrolling around the building, and had a few turrets mounted in the front. Often seen in front of the building were injured civilians, who Cole could heal.

Trish asked Cole to help defend her armored ambulance while she transport some medical supplies and people in need of medical help over from the Neon to the hospital. When they reached the hospital, Alden appeared and, using telekinesis, lifted and threw the bus, with Trish still inside, to the roof of the hospital. It was up to Cole to defeat the Dust Men swarming around the building, and then scale to the top to rescue Trish and her patients from the dangling bus.[1] After that was accomplished, the hospital served as the starting point of some future missions, and also a medical clinic for Cole if he needed medical assistance.

Alden's Tower was a tall structure constructed out of scrap materials. It was located in Empire City and was constructed after the Blast. Located within Tent City, over what used to be a park, Alden's Tower was the largest structure in Empire City next to the Staton Building. Alden and the Dust Men constructed the tower using any scrap materials they could scavenge. The very top of the tower served as a safe place to hide the Ray Sphere, which the Dust Men came into possession of after the Blast.

It additionally served as his new body so that he could "take back what was rightfully his" from Kessler. However, after Kessler stole back the Ray Sphere with the assistance of Zeke Dunbar,[2] Alden used telekinesis to remove the top of the tower to serve as a tool of destruction to unleash his rage on Empire City.

In the mission "The Ray Sphere," Cole and Zeke had to scale the massive tower to reach the Ray Sphere. Along their way, Cole had to power elevators to help Zeke get up there. Once they reached the top, a battle ensued between Cole and the Dust Men, a conflict which ended in Zeke activating the Ray Sphere, and Kessler appearing. Kessler, along with Zeke, subsequently fled in a helicopter with the Ray Sphere.

The Adamson Building was an old brown, brick building located by the harbor of the Warren. It was situated on a large dock area. It was inhabited by the Dust Men most of the time, with two or three of them present at the area and roof of the building. There were also turrets stationed around the building. The building also featured a small water tower on the top, close to the edge. A satellite containing a Dead Drop message could be found on the roof of this building as well.

Coleridge College is an old and presumably abandoned building that has several satellite dishes all around its exterior. Cole utilizes them when he is sent by Moya to track down several spy drones sent by the First Sons to search for the Ray Sphere.

After crashing them and retrieving their flight recorders, he heads to the college to use the satellite dishes there because his phone does not have the supported bandwidth. Unfortunately, the Dust Men are waiting and they ambush Cole upon arrival. He gets through them and uploads the records to Moya, who reveals the drones are coming from the Historic District.

Coleridge College is either extremely old or suffered extensive damage in the Blast, supported by Moya's comment, "I hope the dishes still work". Its architecture consists of old stone with modern balconies and round dome structures around the corner.

After Cole restored power to the remainder of the Warren,[3] he was phoned by undercover agent John White, who told him to meet him outside the Adamson Building, that way they could discuss their plans regarding the Ray Sphere. He told Cole to come alone, but unbeknownst to Cole, a helicopter appeared, causing John to flee from the area. 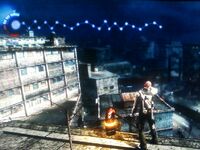 Cole looking over the Slums within the Warren District. 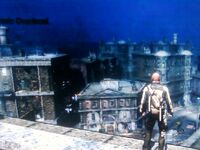 Cole looking over the Warren District in ashes. 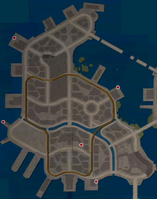 A Map of the Warren District featured in Infamous.